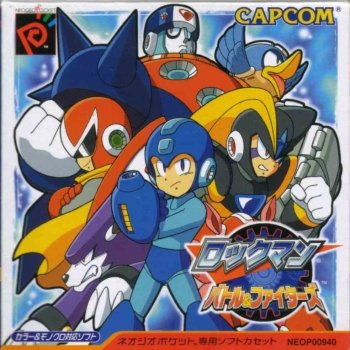 Info
1 Images
Interact with the Game: Favorite I'm Playing This I've Played This I Own This I've Beat This Want To Beat This Want To Play This Want To Buy This
Rockman Battle & Fighters is a fighting game similar to the two arcade titles Mega Man: The Power Battle, and Mega Man 2: The Power Fighters. Playing as one of four characters (Mega Man, Proto Man, Bass, and Duo), the player chooses between three sets of boss battles with various Robot Masters from the series. The battles are fought linearly in any order, and after each boss is defeated, a special weapon is added to the player's arsenal. Each boss is weak to one specific weapon, so the player is encouraged to strategize the order in which the bosses are faced. Two players can use a link cable to transfer database information between systems, but no co-op or versus play is supported.
Game Info
Franchise: -
Released: 2000-07-31
Players: 2
Publisher: Capcom
Developer: Capcom
Platforms: Neo Geo Pocket Color
Genres: Fighting Action
Tags:

SNK vs. Capcom: Match of the Millennium