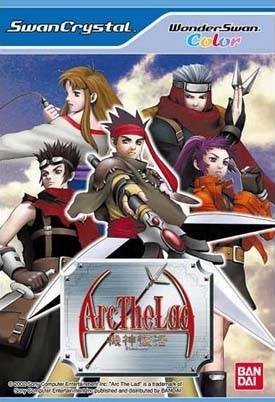 Info
Alpha Coders 1 Images
Interact with the Game: Favorite I'm Playing This I've Played This I Own This I've Beat This Want To Beat This Want To Play This Want To Buy This
Arc the Lad: Kijin Fukkatsu (Arc the Lad: Resurrection of the Machine God) is a Wonderswan Color game developed by Bandai and released in 2002 in Japan. Set after the main series, this game features similar combat and gameplay to the previous installments. Elc, from Arc the Lad II, returns as the main character as he discovers a girl sent from the past to his time because of a hostile robot takeover. Finia, the girl, Elc, and several of his friends return once again to save humanity.
Game Info
Franchise: -
Released: 2002-07-04
Players: 1
Publisher: Bandai
Developer: TOSE
Platforms: WonderSwan Color
Genres: Strategy Adventure Role-Playing
Tags: