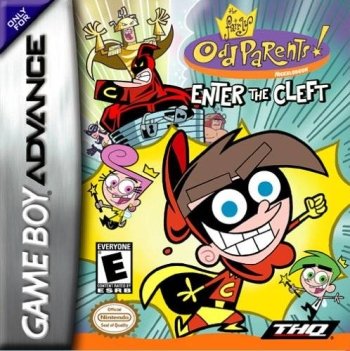 Info
Alpha Coders 1 Images
Interact with the Game: Favorite I'm Playing This I've Played This I Own This I've Beat This Want To Beat This Want To Play This Want To Buy This
The player will control Timmy, who enters the world of his favorite comic book hero, the Crimson Chin. When Timmy discovers Chin has been kidnapped, the only person to save the day is Chin's sidekick, Cleft the Boy Chin Wonder, who just happens to be Timmy in costume. The player must release Chin from captivity by defeating enemies and overcoming obstacles along the way in this side-scrolling, action-packed videogame. Timmy's quirky Fairy Godparents, Cosmo and Wanda, appear throughout the 20 game stages to offer their own strange attempts at assistance. Cosmo and Wanda will supply Timmy/Cleft items to use in his journey -- some of which are key in defeating the captors. Throughout Fairly OddParents, gamers will move through several environments, including the Comic World, the Primitive Age, the Present World and the Future World.
Game Info
Franchise: -
Released: 2002-11-04
Players: 1
Publisher: Altron
Developer: THQ
Platforms: Nintendo Game Boy Advance Game Boy Advance
Genres: Action Platformer
Tags: