Info
2 Images
Interact with the Game: Favorite I'm Playing This I've Played This I Own This I've Beat This Want To Beat This Want To Play This Want To Buy This
Toilet Kids is a vertical shoot 'em up featuring a world filled with scatological enemies and humor. It was released exclusively on the PC Engine. A young boy is accidentally flushed town the toilet one night, appearing in a mysterious world, and must defeat the world's guardian before he can go home. The game has four stages total, each of which has a different theme, and the player is able to target both air enemies and ground enemies in a system similar to that introduced in Xevious.
Game Info
Platforms: TurboGrafx 16 TurboGrafx-16
Franchise: -
Released: 1992-03-06
Players: 2
Play Modes: Coop
Publisher: Media Rings
Developer: Bits Laboratory
Rating: 0.00
Genres:
Tags:

Boogerman: A Pick and Flick Adventure 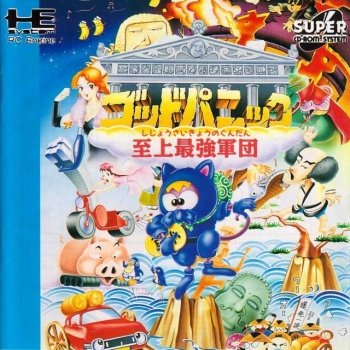