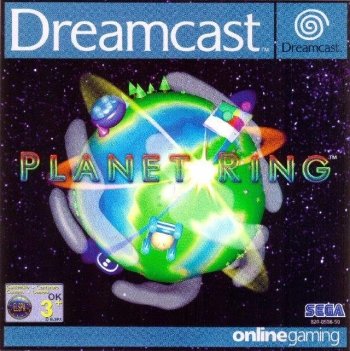 Info
Alpha Coders 1 Images
Interact with the Game: Favorite I'm Playing This I've Played This I Own This I've Beat This Want To Beat This Want To Play This Want To Buy This
Planet Ring is a Sega Dreamcast game released in 2000. The disc was distributed for free in the United Kingdom through the Official Dreamcast Magazine and was one of the few games released in PAL regions to support the Dreamcast Microphone as well as the Dreamcast Keyboard. It was one of the first video games to require the user to be connected to the internet at all times, as it contains four online minigames to help promote the Dreamcast's internet features. Up to 32 players could compete in online events, The game was brought back online in 2014 and has also had the voice chat function brought back. Updates to the server in 2016 allow it to work with the DreamPi [1] The game was only available in Europe.
Game Info
Franchise: -
Released: 2000-12-04
Players: 4+
Publisher:
Developer:
Platforms: Sega Dreamcast Dreamcast
Genres: MMO Action Strategy
Tags: