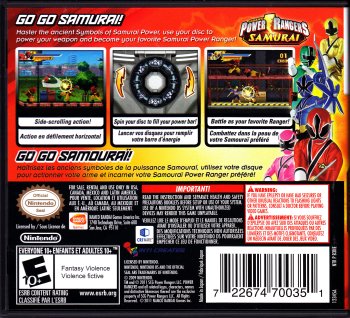 Info
Alpha Coders 3 Images
Interact with the Game: Favorite I'm Playing This I've Played This I Own This I've Beat This Want To Beat This Want To Play This Want To Buy This
Power Rangers Samurai is the eighteenth season of the American children's television series Power Rangers.[1] With Saban Brands buying back the franchise, the show is produced by SCG Power Rangers and began airing on Nickelodeon and Nicktoons on February 7, 2011, making it the first to use the Saban name since the first half of Power Rangers: Wild Force.[2] As with all Power Rangers programs, Power Rangers Samurai is based on one of the entries of the Super Sentai Series; in the case of Samurai, the source series is Samurai Sentai Shinkenger. Saban Brands have said the show will have a "brighter tone and gets an infusion of fun and comedy that wasn't present in seasons 16 and 17."[3] Power Rangers Samurai is the first Power Rangers season to be shot and broadcast in HD and to be airing on Nickelodeon. Samurai is split into two 20-episode seasons; the second set of 20 episodes began on February 18, 2012.[4] and is called Power Rangers Super Samurai,[5][6] Super Samurai is considered the nineteenth season. By 2012, the show had an average of 2 million viewers on Nickelodeon.[7] The highest rated episode was the May 15, 2011 broadcast of "The Blue and the Gold", with 3.7 million viewers.[8]
Game Info
Franchise: -
Released: 2011-11-22
ESRB: E10+ - Everyone 10+
Players: 1
Publisher:
Developer:
Platforms: Nintendo DS Wii
Genres: Action
Tags: