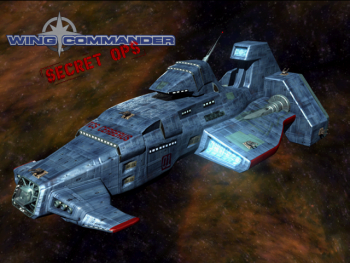 Info
1 Images
Interact with the Game: Favorite I'm Playing This I've Played This I Own This I've Beat This Want To Beat This Want To Play This Want To Buy This
Wing Commander: Secret Ops is an unprecedented episodic game release available exclusively over the internet. Secret Ops is a stand alone space combat action game with 56 new single player missions split into seven downloadable episodes. A new Secret Ops episode, consisting of 6-8 missions, will be posted on the Wing Commander Secret Ops web site each week beginning later this summer. On the days leading up to each episode, new fictional experiences will be posted from the Secret Ops story which sets the stage for the upcoming downloadable episode. Over a 7 week period, a new episode of missions will be available for download on each Thursday. The actual game incorporates a new story, new weapons and more intense battle scenarios than ever before. The Secret Ops story is a continuation of Wing Commander: Prophecy, released late last year. It introduces the Cerberus, a quick-strike cruiser and many other surprises. Players will be propelled through the story via all new cinematic scenes rendered on-the-fly in full 3D, plus gripping new in-flight coms. Game play will include new, enhanced weapons and multi-stage capital ship strike missions. The game universe is packed with unique environments including dense asteroids fields, new Confed star bases and remote stations to explore. There are even cameos from past Wing Commander ships. And by the way, you can experience this unprecedented gaming event for FREE*. (except for standard Internet connection charges). STORY: Wing Commander: Secret Ops is set in the aftermath of the alien war that took place in Wing Commander: Prophecy. The super-carrier Midway's very best pilots are assigned to escort the Confederation's first "quick strike" assault cruiser: Cerberus. The Terran Confederation Intelligence Service (TCIS) has slated Cerberus for 'deep cover' duty in foreign systems. Her specific capabilities remain TOP SECRET. But, to the Ace pilots from Midway, it is no secret that unrest is brewing in Sol and Vega sectors, that Kilrathi space (now littered with Alien debris) is a hotbed of looting and that the real WAR has just begun.
Game Info
Franchise: -
Released: 1998-12-31
ESRB: T - Teen
Players: 1
Publisher: Electronic Arts
Developer:
Platforms: PC
Genres: Flight Simulator Action Simulation
Tags: