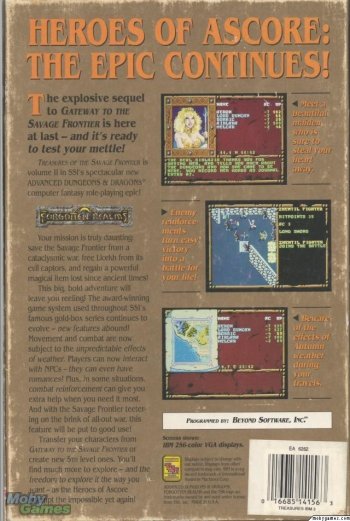 Info
Alpha Coders 3 Images
Interact with the Game: Favorite I'm Playing This I've Played This I Own This I've Beat This Want To Beat This Want To Play This Want To Buy This
The Heroes of Ascore have been magically summoned to help old dwarven allies retake the city of Llorkh from the foul Zhentarim legions. After that, there are more dangers that lurk in the wilds of the Savage Frontier... The sequel to Gateway to the Savage Frontier is a role-playing game using SSI's standard Gold Box gameplay system. You can import existing characters from playing the first game. The game is viewed form above, as you move your party into mystery, buildings and combat. The game now includes weather changes that affect movement and NPC interaction.
Game Info
Franchise: -
Released: 1992-01-01
Players: 1
Publisher: Strategic Simulations, Inc.
Developer: Beyond Software, Inc.
Platforms: PC Amiga
Genres: Role-Playing Adventure
Tags: