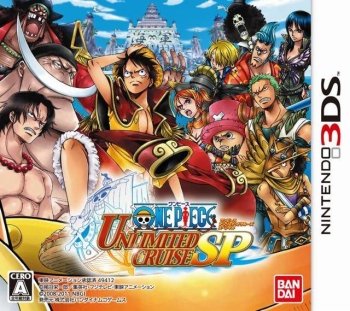 Info
Alpha Coders 2 Images
Interact with the Game: Favorite I'm Playing This I've Played This I Own This I've Beat This Want To Beat This Want To Play This Want To Buy This
In One Piece: Unlimited Cruise SP, the motley crew of Straw Hat Pirates find themselves aboard the Thousand Sunny Ship, the ship of 1,000 seas, as they set sail to a variety of mysterious islands and begin their fantastic adventures. The Nintendo 3DS will immerse players in an unforgettable three-dimensional journey around all the famous One Piece Battle site such as Marineford. Along the way, the game’s hero Monkey D. Luffy organizes and leads a crew named the Straw Hat Pirates, who together will face a host of dastardly pirate crews and marines. In adventure mode, players will be able to choose the playable character from Straw Hat Pirates, with more than 30 boss characters from the original anime series to take on. The games will also feature an exclusive character, created by none other than One Piece author Eiichiro Oda, who will be key to the games’ original storyline.
Game Info
Franchise: -
Released: 2011-05-26
ESRB: E10+ - Everyone 10+
Players: 1
Publisher: Bandai
Developer: Ganbarion
Platforms: Nintendo 3DS
Genres: Action Action-Adventure
Tags: