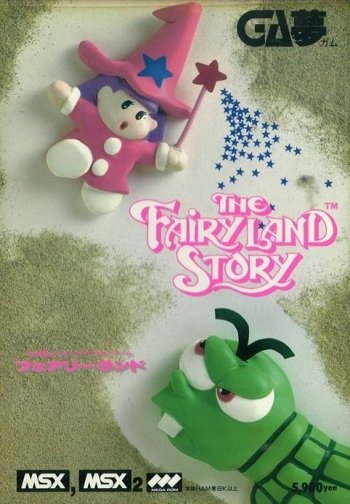 Info
2 Images
Interact with the Game: Favorite I'm Playing This I've Played This I Own This I've Beat This Want To Beat This Want To Play This Want To Buy This
The Fairyland Story is a arcade platform game released by Taito in July 1985. The game was ported to the MSX and X68000 computers, and later was included in Taito Memories and Taito Legends 2 for the PlayStation 2 for the Xbox and the PC. The player controls a spell-casting elf who turns evil wizards, witches and other enemies into cakes and pushes them off of the platform ledges to destroy them. Each level takes place inside of various castles. If an enemy touches the player character, the elf becomes entrapped in a magic bubble and floats away.
Game Info
Franchise: -
Released: 1985-07-01
Players: 2
Publisher:
Developer:
Platforms: Arcade MSX Sharp X68000 PlayStation 4 Nintendo Switch
Genres: Platform Action Platformer
Tags: