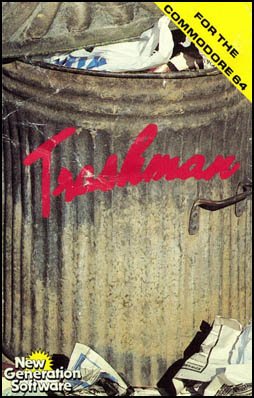 Info
Alpha Coders 1 Images
Interact with the Game: Favorite I'm Playing This I've Played This I Own This I've Beat This Want To Beat This Want To Play This Want To Buy This
There are seven levels each consisting of one street. The player starts at the bottom of the street and has to empty the bin from each house into the dustcart that moves slowly up the left lane of the road. The first level consists of five houses each with a bin to be emptied, the second level has six houses, and so on. Once all the bins are emptied, the player simply walks to the top of the street to complete the level. Each level has a time limit, if the player fails to empty all the bins within this limit then the player has to repeat the level. If a level is played three times exceeding the time limit, the game is over. The player must avoid stepping onto grass, as doing so will cause the time counter to decrease very rapidly until they step off it. But if the player manages to empty a bin without stepping onto any grass, the householder appears at the door and invites the player in for a few seconds. This will increase the time limit, as well as providing a little humorous conversation, such as "Could you look at my TV?" - "I meant mend it, not watch it". The biggest threat to the player is the passing traffic in the road: if the player is run over by a car the game ends immediately. Sometimes if the player steps onto the grass, a dog comes out of the house and tries to bite the player, making them limp for a minute or two. In later levels, pavement cyclists must be avoided as well
Game Info
Franchise: -
Released: 1984-12-31
Players: 1
Publisher: New Generation Software
Developer:
Platforms: Sinclair ZX Spectrum Amstrad CPC Commodore 64 ZX Spectrum VIC-20
Genres: Action
Tags: