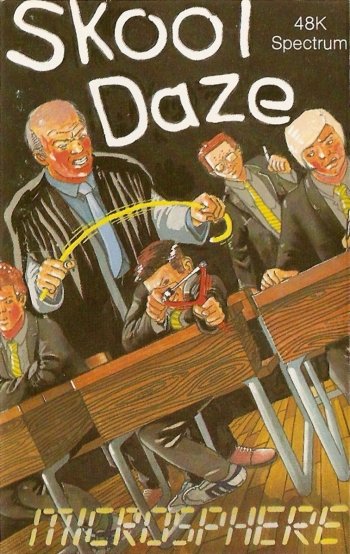 Info
1 Images
Interact with the Game: Favorite I'm Playing This I've Played This I Own This I've Beat This Want To Beat This Want To Play This Want To Buy This
The game features the player as a schoolboy named Eric, with the objective of stealing his report card out of the staff room safe by accomplishing various tasks around the school. The computer controls all the other characters in the game, including the headmaster, other teachers and other pupils.[1] The four teachers are Mr Wacker (the headmaster), Mr Rockitt (the science teacher), Mr Withit (the geography teacher) and Mr Creak (the history master). Other than Eric, three of the pupils are named: Boy Wander (the tearaway), Angelface (the bully) and Einstein (the swot). The player has the option of renaming the characters before the game begins.[2] There are also many unnamed, undistinguished pupils at the school. If Eric is caught out of class or otherwise misbehaving, teacher characters pursue him and issue lines.[3] When 10,000 lines or more are accumulated, the game ends with Eric's expulsion.[4] However, Eric can also receive lines for things that are not his fault, such as lying or sitting on the floor when in fact he has been knocked down, or being nearest a teacher who has just been hit by a projectile fired by one of the other pupils. So part of the challenge of the game is to prevent other pupils from getting Eric into trouble
Game Info
Franchise: -
Released: 1985-12-31
Players: 1
Publisher: Microsphere
Developer:
Platforms: Sinclair ZX Spectrum Commodore 64 ZX Spectrum
Genres: Platform Action Adventure
Tags: