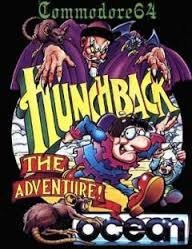 Info
Alpha Coders 1 Images
Interact with the Game: Favorite I'm Playing This I've Played This I Own This I've Beat This Want To Beat This Want To Play This Want To Buy This
As they went on to demonstrate with Nightbreed, Ocean wasn't afraid to try a few different approaches to licensed material once they'd gotten their mitts on it, which is how you explain following up not one but two run-and-jump platform games with a text adventure game -- the change in approach a breath of fresh air and, perhaps, a response to critics suggesting that rehashing the same old thing is getting tired and stale. Many arcade games of the period would have a hard time with the transition, lacking enough of a skeleton of plot to flesh out with characters and events, but the Hunchback franchise has always enjoyed descent from one of the greatest works of French fiction (not incidentally long since in the public domain, hence ripe for free squeezing), Victor Hugo's Notre-Dame de Paris... even if it hadn't made terribly extensive use of its heritage up to this title. You are still Quasimodo, deformed ward of the Church, and you still quest for the favour and well-being of gypsy Esperalda, but for once you don't do so by jumping over pits and ducking under arrows (and, uh, participating in organised sporting events)! Instead, you navigate sites in, around and under Paris, including the Cathedral of Notre Dame, collecting inventory items to use to solve puzzles and overcome minions of the Bishop and Cardinal -- foes who no longer cause you to lose a life at the merest contact. The narrative does sustain a bit of garbling along the way in the transition from high literature to action arcade game and back to crypto-literary interactive fiction, but they take what they've learned about design along the way and present things clearly, possessions and companions continually visually indicated above a baroque text input/output field. The interface is as intuitive as those of the prior games in the franchise, despite the enormous gulf between their respective styles of gameplay. Now you can give your twitchy fingers a rest and let your brain take over for a while.
Game Info
Franchise: -
Released: 1986-12-31
Players: 1
Publisher: Ocean
Developer:
Platforms: Commodore 64 Amstrad CPC ZX Spectrum
Genres: Adventure
Tags: