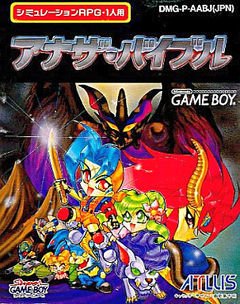 Info
Alpha Coders 1 Images
Interact with the Game: Favorite I'm Playing This I've Played This I Own This I've Beat This Want To Beat This Want To Play This Want To Buy This
Taking place in the world of Granas, there was once a great war between humans and demons. After a long conflict peace was restored between humans and demons. Eventually a demon cult appears and call out to the demons to free themselves of the humans, and so the demons began to oppose the humans. The protagonist, Cassiel, lost his parents and decides to abandon his hometown to travel. After rescuing the heroine, Pyutia, their journey becomes one geared towards saving the world.
Game Info
Franchise: -
Released: 1995-03-03
Players: 1
Publisher: Atlus
Developer: Multimedia Intelligence Transfer
Platforms: Nintendo Game Boy Game Boy
Genres: Role-Playing
Tags: