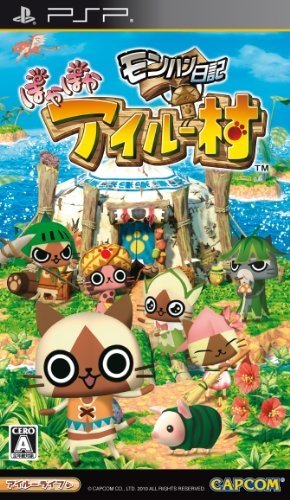 Info
1 Images
Interact with the Game: Favorite I'm Playing This I've Played This I Own This I've Beat This Want To Beat This Want To Play This Want To Buy This
Monster Hunter Diary Poka Poka Airou Village Monhan Nikki Poka Poka Airū Mura?)[1] is a spin-off installment in the Monster Hunter series, developed by FromSoftware and published by Capcom for the PlayStation Portable. It was released in Japan on August 26, 2010. The word airou is the Japanese equivalent of felyne, a fictional sapient cat species that appears in all of the Monster Hunter games. The player gives orders to the felynes to progress to the end of quests instead of having direct control over them. The game also uses a much more cartoonish art style as opposed to the realism seen in other Monster Hunter games. More emphasis is placed on style and village management. A few Hello Kitty items are also available in the game.
Game Info
Franchise: -
Released: 2010-08-26
Publisher: Capcom
Developer: FromSoftware
Platforms: Sony PSP PlayStation Portable Sony Playstation Portable
Genres: Action
Tags: