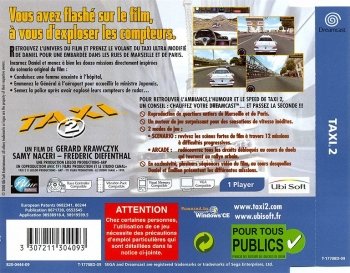 Info
2 Images
Interact with the Game: Favorite I'm Playing This I've Played This I Own This I've Beat This Want To Beat This Want To Play This Want To Buy This
Taxi 2: Le Jeu (Taxi 2: The Game) is a racing game developed by Blue Sphere for the Sega Dreamcast based on the French film Taxi 2. It is notable for being the only Dreamcast game exclusive to France, and the only Sega game for that matter (aside from localised versions). The game was also released for the Sony PlayStation and PC.
Game Info
Franchise: -
Released: 2014-08-22
ESRB: E - Everyone
Players: 1
Publisher: Ubisoft
Developer: Blue Sphere
Platforms: Sega Dreamcast PC
Genres: Racing Simulation
Tags: