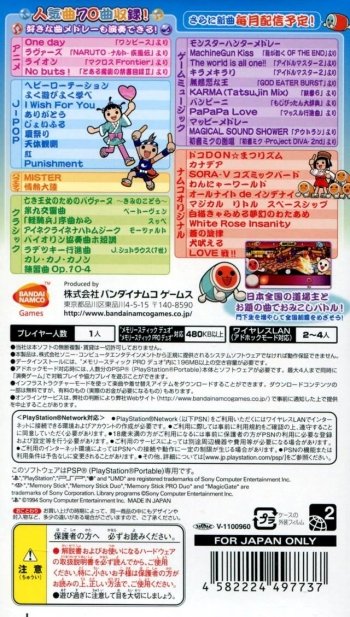 Info
Alpha Coders 3 Images
Interact with the Game: Favorite I'm Playing This I've Played This I Own This I've Beat This Want To Beat This Want To Play This Want To Buy This
Portable DX (Deluxe) comes 5 whole years and 6 Nintendo console releases after the release of the last PSP Taiko, Portable 2. The total number of initial songs is 70, and with the additional downloadable songs thereafter (like every Taiko PSP has done), it matches the massive songlists introduced on the Wii. Like the other recent games, the songlist has become a lot more geared towards Namco Originals. Portable DX is also the first console Taiko to show the total number of drumrolls made in the song, and the second console Taiko game to introduce the all new Ura Oni difficulties. Other new mechanics in the game include organizing almost all unlockables in the game into an Achievement list, and a mode called Medley Mode, in which three, five, or eight different songs are put together and played all at once. Two new gameplay modifiers were also added into the game, which randomize the notes to different degrees. The Bell note has been removed from this release and the vestigial function of the analog stick is to produce sounds for fun. (http://taikotime.blogspot.ca)
Game Info
Franchise: -
Released: 2011-07-14
ESRB: E - Everyone
Players: 1
Publisher: Namco
Developer: Namco
Platforms: Sony PSP PlayStation Portable PlayStation Network (PSP) Sony Playstation Portable
Genres: Music Music/Rhythm
Tags: