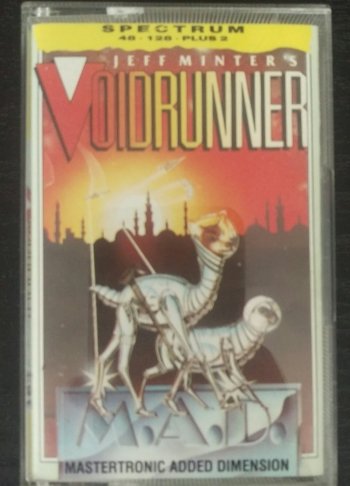 Info
2 Images
Interact with the Game: Favorite I'm Playing This I've Played This I Own This I've Beat This Want To Beat This Want To Play This Want To Buy This
The final conflict in the droid wars is up ahead in Jeff Minter's Voidrunner, the second sequel to Gridrunner. After the defeat in the Matrix wars the droids are out for revenge, preparing a nuke to destroy the earth. Therefore a corps of pilots are sent to the droid home planet with the objective to eliminate every single droid. Gameplay is similar to Gridrunner. Like in Centipede, the enemies move in a pattern down the screen and the player have to shoot them before they reach the ship. There's also the zapper, a vertically moving line, that occasionally pulses. If the player ship is on the same line when this happen, it will die. The enemies come in many different flavours. The most common ones just explodes when hit, bouncing predictable around the screen. We also have the Gridrunner style aliens that when hit leaves a pod that needs to be destroyed. Typical for a Minter games, you'll also fight furry animals like camels and goats. New in Voidrunner is that you don't just have one ship, but four. In early levels the ships will move around in a cluster. Later in the game some of your ships will have inverted motion. Some of these formations will have the ships shooting in different directions. Handy when you have enemies coming in from behind.
Game Info
Franchise: -
Released: 1987-12-31
Players: 1
Publisher: Mastertronic
Developer: Llamasoft
Platforms: Sinclair ZX Spectrum Commodore 64 MSX ZX Spectrum Commodore 16
Genres: Action Shoot 'Em Up
Tags: