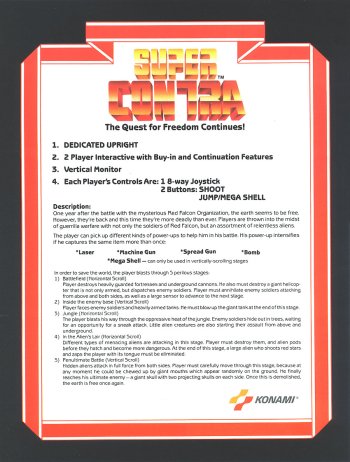 Interact with the Game: Favorite I'm Playing This I've Played This I Own This I've Beat This Want To Beat This Want To Play This Want To Buy This
Super Contra is a run and gun video game released by Konami in 1988. It is the sequel to the original Contra. A year after the battle with the Red Falcon Organization, Bill and Lance are sent on another mission. This time, the alien forces have taken over an allied military base, possessing most of its troops. Bill and Lance must not only fight against their former comrades-in-arms, but also a new mutated form of the same alien creatures they fought during their previous mission.
Game Info
Franchise: Contra
Released: 1988-01-08
Players: 2
Play Modes: Coop
Publisher: Konami
Developer: Konami
Platforms: Arcade
Genres: Action
Tags:
Part of the Contra Fan Club
Contra Fan Club 7 Wallpapers 11 Images 1 Gifs 17 Games