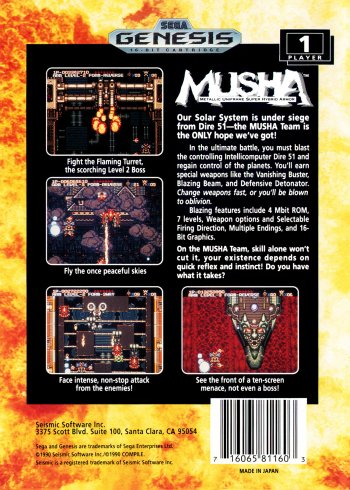 Interact with the Game: Favorite I'm Playing This I've Played This I Own This I've Beat This Want To Beat This Want To Play This Want To Buy This
A spin-off from the successful Aleste series by Compile, Musha Aleste takes the same top-down shooter mechanics of it's predecessors but stages the action in a bizarre universe that merges traditional Japanese lore with sci-fi mecha action. Instead of commanding a ship, you will actually step into the cockpit of a ninja-styled mecha as you fight through the many levels in the game, with several option satellites that can be configured to use different formations.
Game Info
Franchise: -
Released: 1990-11-01
Publisher: Seismic Software Inc.
Developer: Compile
Platforms: Sega Genesis
Genres: Action
Tags: