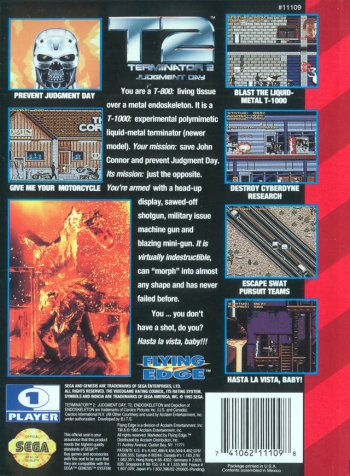 Interact with the Game: Favorite I'm Playing This I've Played This I Own This I've Beat This Want To Beat This Want To Play This Want To Buy This
This adaptation of the movie is essentially a side-scrolling action game, with both melee combat and shooting; there are also driving sequences between the side-scrolling levels, which mainly consists of avoiding pursuers and safely arriving to the next destination. T-800's default weapon is a pistol, but he can later acquire other weapons such as a shotgun, a mini-gun, etc. The "good terminator" can also use kicks and punches to dispose of the enemies. As in the movie, T-1000 appears frequently and must be fought and incapacitated, but can not be permanently killed until the ending part.
Game Info
Franchise: Terminator
Released: 1991-06-05
ESRB: E - Everyone
Publisher: Flying Edge
Developer: B.I.T.S
Platforms: Sega Genesis
Genres: Action
Tags:
Part of the Terminator Fan Club
Terminator Fan Club 355 Wallpapers 117 Art 362 Images 138 Avatars 131 Gifs 18 Games 7 Movies 1 TV Shows