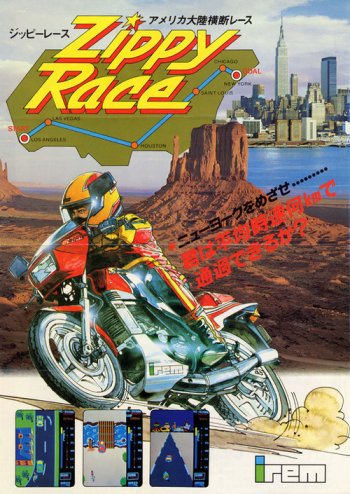 Info
Alpha Coders 1 Images
Interact with the Game: Favorite I'm Playing This I've Played This I Own This I've Beat This Want To Beat This Want To Play This Want To Buy This
MotoRace USA (also known as Traverse USA, in Japan as Zippy Race and in Spain as Mototour) is an arcade game released by Irem in 1983. The game's main character is a racer who must travel on his motorbike from Los Angeles to New York City while avoiding many cars. Every level has two parts: The first part uses an overhead view. The player's rank can be increased by overtaking cars. The current rank is shown in the bottom right hand corner of the game screen during each stage. The second part uses an over the shoulder perspective. The player must try not to crash into oncoming traffic while a background relative to the city he's traveling to is shown (i.e.: if the player is reaching Las Vegas, then a few casinos can be seen in the background).
Game Info
Franchise: -
Released: 1983-12-31
Players: 2
Publisher:
Developer:
Platforms: Arcade Nintendo Entertainment System Sega SG-1000 PlayStation 4 Nintendo Switch
Genres: Racing Driving/Racing
Tags: 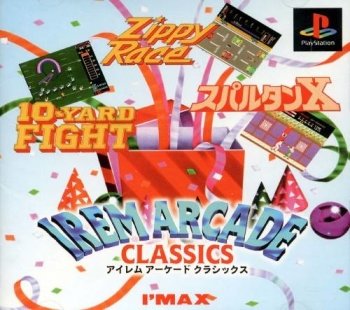