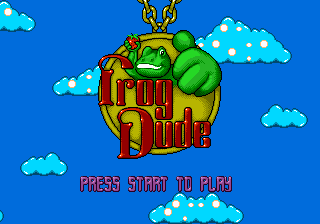 Interact with the Game: Favorite I'm Playing This I've Played This I Own This I've Beat This Want To Beat This Want To Play This Want To Buy This
Frog Dude is a cancelled platformer that was in development by Twilight for Genesis / Mega Drive in 1993. The game was never officially announced but, in 2014, Gamesthatwerent contacted Andy Swann, the lead programmer of Frog Dude, which shared a short playable demo of the game. The main character was a strange man who used a mace to attack and could transform himself into a long-tongued frog. There is nothing to interact with, no enemies to fight, and no sound effects or music. However, at least a nice cut-scene welcomes players at the beginning of the prototype.
Game Info
Franchise: -
Released: 0000-00-00
Players: 1
Developer: Twilight
Platforms: Sega Genesis
Tags: