Interact with the Game: Favorite I'm Playing This I've Played This I Own This I've Beat This Want To Beat This Want To Play This Want To Buy This
Towards the end of the Han Dynasty, China was controlled by the Emperor Ling, who was in turn controlled by ten of his servants in the royal palace. This created a convenient atmosphere for bandits, and the land was in turmoil. Then the Emperor ordered the ten dukes to take it on themselves to restore peace in the land, but the dukes instead fought amongst themselves. Finally, the duke Cao Cao took the Emperor captive and he now controls the realm. Five fighters set out to take on Cao Cao's forces and restore equilibrium to the land.
Game Info
Platforms: PC NEC PC-9801 Super A'Can
Franchise: -
Released: 1993-12-31
Players: 2
Publisher: Panda Entertainment Technology
Developer: Panda Entertainment Technology
Rating: 0.00
Genres:
Tags: 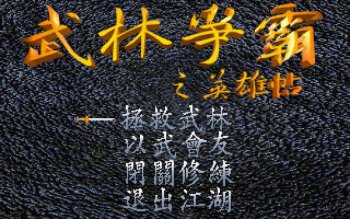