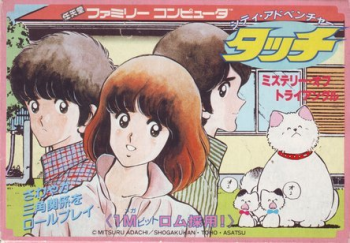 Info
Alpha Coders 1 Wallpapers 1 Images
Interact with the Game: Favorite I'm Playing This I've Played This I Own This I've Beat This Want To Beat This Want To Play This Want To Buy This
CITY ADVENTURE touch MYSTERY OF TRIANGLE is an action game for the Famicom and NES system that was published by Toho in 1987. The game is based on the high school and baseball team themed manga Touch. City Adventure Touch is somewhat notorious in Japan for bearing absolutely no resemblance to the source material. A comic book concerning the Mystery of Triangle is included in the manual. The story appears to revolve around a character's dog who disappears into an alternate dimension, and the three children who attempt to rescue it, one of which attacks by throwing baseballs.
Game Info
Franchise: -
Released: 1987-03-14
Publisher: Toho
Developer: Compile
Platforms: Nintendo Entertainment System Nintendo Entertainment System (NES)
Genres: Action Brawler
Tags: 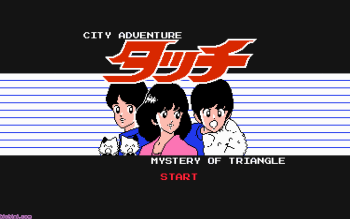