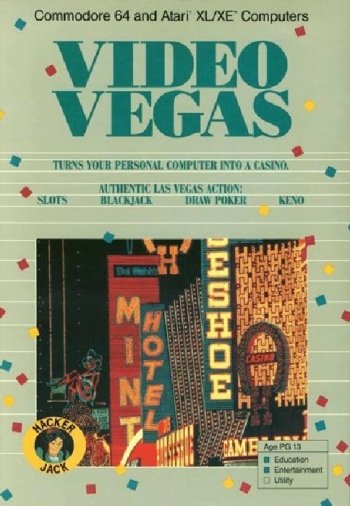 Info
Alpha Coders 1 Images
Interact with the Game: Favorite I'm Playing This I've Played This I Own This I've Beat This Want To Beat This Want To Play This Want To Buy This
Video Vegas was Funware's first game released to the public. According to Michael Brouthers (president of Funware), Video Vegas was actually programmed by an employee at Texas Instruments prior to the founding of Funware. It was used simply to get Funware into the marketplace and let people know that a new TI-99/4A cartridge manufacturer was out there. This helps explain the reason why the game is inferior to all of the later titles Funware put out, since it was basically a demo game for the public to see that Michael Brouthers' company was committed to releasing TI cartridges. In addition, Video Vegas never appeared in the company's 1983 catalog, which helps further show that it was indeed only a stepping stone. In 1983 there were as many as 3 companies interested in buying out Funware, those being Activision, Epyx, and Creative Software. In the end Funware was sold to Creative Software, but, both Epyx and Activision would later give a go at marketing TI-99/4A games independently near the end of 1983. According to Michael Brouthers, it only cost Funware $4 US to make each cartridge game!
Game Info
Franchise: -
Released: 0000-00-00
ESRB: E - Everyone
Players: 1
Publisher:
Developer:
Platforms: Texas Instruments TI-99/4A Amiga Apple II Atari ST Commodore 64 Atari 8-bit PC
Genres: Action Strategy Card Game Gambling
Tags: