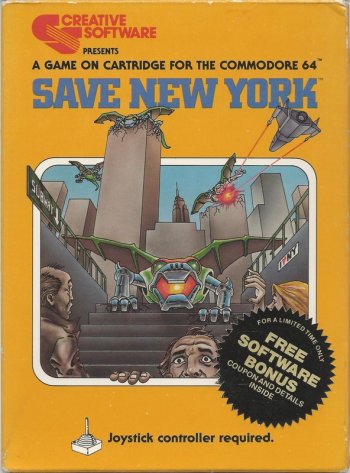 Info
Alpha Coders 1 Images
Interact with the Game: Favorite I'm Playing This I've Played This I Own This I've Beat This Want To Beat This Want To Play This Want To Buy This
"Save New York" is a shooter where the action takes place on one screen only; but there are lots of things going on on that screen. You see blue sky over skyscrapers and subway tunnels beneath. New York is under attack, and you are a pilot in a little blue airplane who must save it from destruction caused by aliens. At the beginning of each stage, the aliens begin to drop from the sky. Your goal is to cruise around in your plane and to shoot them, preferably before they descend on a building, because then they will begin to crush it until it is destroyed completely. Once you have disposed of such an alien wave, you enter the next stage, with tougher and more numerous foes. Your plane might run out of fuel; in this case, you must pick up fuel left by friendly planes who appear sometimes on the screen. Often an alien will lay an egg on the ground, and a newly born baby will immediately begin to destroy the buildings from below. To prevent this, you will have to leave your craft, enter the dangerous subway tunnels, and dispose of the young alien using your handgun.
Game Info
Franchise: -
Released: 1983-07-18
Players: 2
Play Modes: Coop
Publisher: Creative Software
Developer: Creative Software
Platforms: Commodore 64
Genres: Action Shoot 'Em Up
Tags: