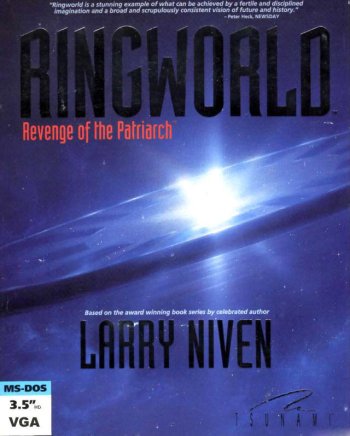 Ringworld: Revenge of the Patriarch

Info
Alpha Coders 1 Images
Interact with the Game: Favorite I'm Playing This I've Played This I Own This I've Beat This Want To Beat This Want To Play This Want To Buy This
A graphical adventure set in Larry Niven's "Known Space" universe. The centerpiece of the Known Space universe is the Ringworld, an artificially created planet that is actually an immense band orbiting a distant star (Halo borrows this idea for its setting). If you aren't familiar with Niven's series, go out and pick up any one of the dozens of Known Space books and you won't be far from having to track down all of them. In Revenge of the Patriarch, the player must travel to the Ringworld to uncover information which could prevent the alien Kzinti from starting another war with humanity. It follows the standard point and click formula for adventure games.
Game Info
Franchise: -
Released: 1992-01-01
Players: 1
Publisher: Tsunami Media
Developer: Tsunami Media
Platforms: PC
Genres: Adventure
Tags: